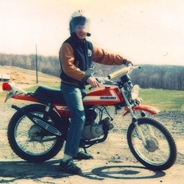 My interest in Corvettes developed out of my love for dirt bikes, as a kid growing up in suburban Johnstown. After much begging, my parents bought me a motorcycle at age 11 (what were they thinking ! ).

Eventually, my Dad bought a street bike and, at 16, I obtained a motorcycle license, just after I received my PA driver’s license. After a few years of street riding, my Dad convinced me that we should sell the bikes and pursue a “safer” motoring hobby. The hunt for a sports car was on.

At first, we focused on British cars (Triumph, MG) then Italian (Alfa Romeo) and ultimately decided on a 1975 Corvette convertible. The car was not only beautiful, but also, if you needed parts, there’s a Chevy dealer in every town. At 19, with a Corvette Stingray in the house, motorcycles were a distant memory ! 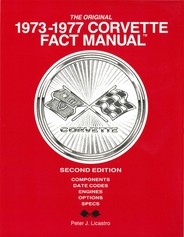 Historically, the mid-1970’s Corvettes were not very desirable as collector cars. Primarily because government safety, emissions and fuel economy standards dramatically reduced the horsepower ratings compared with the muscle-car era Corvettes. Still, the ’75 was my preoccupation during summer breaks and, eventually, I learned every nut and bolt on the car. As a business-minded student at Villanova, I concluded there was an under-served market of mid-’70’s Corvette owners.

So, I decided that I would write the first non-General Motors reference book dedicated to these forgotten models. Now, 25 years later, the ’75 roadster that gave me the Corvette bug calls my garage “home” and shares a bunk with my 2008 Velocity Yellow, 6-speed coupe (pictured at the Conemaugh Gorge in the header of this web page).

My first “book” was actually a spiral-bound manual titled, The Original 1974-1976 Corvette Fact Manual. It was self-published in 1989 during my senior year at Villanova. I researched and wrote the manual and paid a copy center to have it “desktop published” with a laser printer (what we now do on a daily basis with MS Word !) The first 50 copies of the Fact Manual were printed at the Sir Speedy print shop in Ardmore, PA. My sole proprietorship, Just the Facts Publishing, was born.

The entire process was a labor of love that required months of work and a lot of trial and error (my friends and family thought I was C-R-A-Z-Y). Research, phone calls, interviews, writing, re-writing, editing, printing, marketing, inventory and selling. Of course, my goal was to make big profits from my little venture (but I hoped, at least, to break-even). The project was profitable and led to reprints and revised editions. The book is still in print and known as The Original 1973-1977 Corvette Fact Manual, Second Edition. 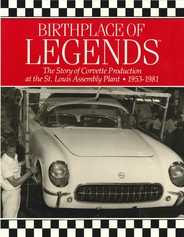 During 1990, I drove to Bloomington, Illinois to attend the renowned Bloomington Gold Corvette show. It was a hot, Saturday afternoon in central Illinois and after looking at Corvettes all day, I was ready for a road trip. As I studied the atlas, I realized that St. Louis was only a few hours away.

Why St. Louis ? Not to see the Gateway Arch, but because a massive GM assembly plant there built over 13 million cars and trucks, including about 700,000 Corvettes. The Corvette line moved to Bowling Green, Kentucky in 1981 and the entire plant closed in 1987.

So, I hit the road and drove to St. Louis. What’s the fastest way to get directions to an abandoned factory ? The front desk lady at the downtown Adam’s Mark hotel, of course. “Son, why would you want to go there ? The GM plant closed years ago. And, besides, it’s in a bad area.” She graciously wrote out directions and off I raced to Union Boulevard and Natural Bridge Road. I had one hour of daylight remaining !

I found the GM complex and the Corvette building. Mission accomplished. Nothing to see but a gigantic, empty assembly plant (how exciting . . . a scene that only a gear-head can appreciate). For 28 years, Corvettes were built in only one place and I was staring at it – as the sun began to set.

I left St. Louis thinking there’s a story behind those walls that needs to be told. After a few years of research and writing, I published Birthplace of Legends, The Story of Corvette Production at the St. Louis Assembly Plant, 1953-1981. Less technical than the Fact Manuals and more of a history book and photo essay on the Corvette factory. 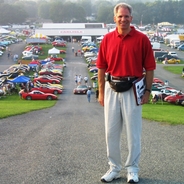 The most rewarding aspect of my publishing adventure was completely unexpected – the people that I met along the way. Editors of Corvette magazines asked me to write articles for publication (and they paid me for it !), the Bloomington Gold show invited me to join the judging team for the 1973-1977 division, and Corvette clubs asked me to give presentations at conventions and club events.

One of my proudest Corvette-related accomplishments was the opportunity to write a series of articles for Corvette Quarterly – The Official Journal of America’s World-Class Sports Car. The magazine was published by Campbell-Ewald on behalf of Chevrolet and was the successor to Corvette News. At the request of Executive Editor, Jerry Burton, I wrote four articles in the Backtrack Series that showcased the development history of each generation of Corvette up to the unveiling of the ‘new’ 1997 fifth generation Corvette.

I also did a feature on Donna Mae Mims, titled “I Drive a Corvette”. Donna Mae was a legendary race car driver, Corvette fanatic, and Pittsburgher – best known for her pink Corvette with an image of Marilyn Monroe painted on the hood. Donna Mae passed away in 2009 and her spirit, energy and enthusiasm are greatly missed.

The Corvette Quarterly articles are linked as PDF files for you to enjoy (click the magazine cover image to access).

Pete has helped us navigate very challenging situations where we simply lack the real estate knowledge that he provides.